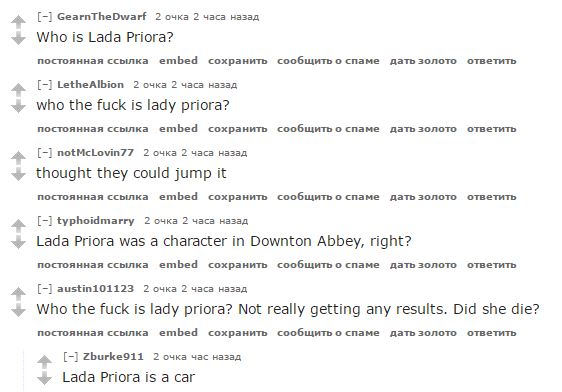 I was expecting a woman to fall off as I read the title as Lady Priora. I'm kind of surprised OP didn't just say "car drives off boat".

I genuinely thought Lady Priora was someone of royal descent and just chose to end her life....I need more sleep.

WHAT THE FUCK I read that title about 5 times trying to understand what the fuck Lady Priora was. I've been doozelschmorfed.

Lada Priora is the model of the car; i'd never heard of it (thanks Google)

It comes from the Latin word prius which means priority, as in "it is a priority that I get off this ferry. Oh, fuck. Glugg. Glugg. Glugg."

I read it "Lady", and thought I was out of the loop on a new Pop Star named Lady Priora.

I did, too. I was so confused.

Pretty sure that's most people reading this thread, including myself.

Yeah I kept looking around for the lady to fall, the car suddenly driving away rather surprised me.

Same thing, man. Was confused when a car seemingly jettisoned off the ferry, so I concluded she must have been driving. Then reading happened again and I understood.

I still don't know what Lada Priora is...

It's the make and model of car that crashed.

Seriously. I thought Lady Priora was the woman in the bottom left in the sweater, and she was gonna fall off the balcony when the ferry docked.

I was like "Who the fuck is Lada Priora and why did they misspell 'Lady'?"

I read it as: Lady Priora Falls (as if it's a waterfall) of (not off) a ferry in Kerch in the Crimea. I was very confused, even after watching the gif.

Same here! Thoroughly confused, till I saw gif, even though I am familiar with Ladas as cars (Thanks Top Gear!!).

I thought Lady Priora was some greek statue or something, and was really interested how the hell a statue was going to fall off that ferry.

Also read it as that and wondered who it was

I read it correctly, but still assumed it was the name of some celeb I'm not familiar with.

Same exact thing here. I literally reread the post title several times, and even then, thought it was a typo and I just wasn't in the know enough to know who Lada was and came to the comments to be informed who she was. face palm

Me too! Hadn't had coffee yet. And, on top of misreading, I accidentally clicked on this polar bear video. I watched it beginning to end thinking what a peculiar name "Lady Priora" was for a polar bear, and wondering what passes for a ferry in Crimea.

I was thinking, why does Lady Priora drive such a shit car?

When I think I am alone on doing something stupid, there is a comment with 2000+ votes saying I'm not.

I read that title like 5 times including after I found out it was a car and I read it as lady every single time.

I was wondering why some royalty was driving some normal economy car on a ferry.

To compound your dyslexia I read "Crimea" as "Cinema" and thought some lady fell off a high point in a movie theatre and "Kirch" was the movie playing at the time.

Probably 50% of people in US read it like this assuming a typo on the part of OP. We never heard of this kind of car.

Did exactly the same, and came to the comments to try and understand who on earth Lady Priora was..

It's ok, I just got my nights sleep and thought some lady would fall off the second deck and was super confused for a second.

I had the same reaction, and now am reading these comments and chuckling and trying not to laugh and my uber driving is looking at me weird, now.

My guess - the Lada Priora is a saloon, (not salon), the water machine is
likely a mistranslation of car in water.

Was that practice or was it a real situation?

At first I was thinking who the fuck is Lady Priora

And then I thought thought wtf is a lada priora.

Have you found out? I still don't have a clue.

Now I'm wondering if this Lada Priora really did fell off the ferry or was intentionally disposed of.

Have you ever been in, um... a Lada?
Lada? No, I haven't.
No? Oh. It's the worst car ever built. Tiny, little thing, you know. Your head would hit the ceiling when you hit a pothole. And the heat never worked. (chuckles) And no air conditioning. You know, your skin would stick to the seats in the summer. It was a coffin on wheels. But then, after the fall, we got the Lexus. Temperature control. Automatic windows. And so much room. First time I fucked my ex-wife, in a Lexus. (laughs) You could never do that in a Lada. No space. Huh? (laughs) You see, Mr. President. I want the Lexus. And you're trying to sell me a Lada.
(House of Cards)

Someone lost a Lada? That's $50 they'll never get back.

I read this as "Lady Priora" and was wondering who this Lady was...

Lada actually has a corporate building and office in Toronto.
I have not seen a Lada in Canada since the mid-1990s (when they tried to sell one at a car exhibition in Edmonton, Alberta).
Wikipedia says "Lada disappeared from Canada after the 1998 model year, replaced by low-cost South Korean automakers".
Why would they have a Lada corporate office in Toronto? I can't locate a Lada dealer anywhere in Canada. Am I missing something?

Most of the world doesn't know what a lada priora is.

Who is Lada Priora?

who the fuck is lady priora?

Lada Priora was a character in Downton Abbey, right?

Who the fuck is lady priora? Not really getting any results. Did she die?

Lada Priora is a car

I just Googled, "who the hell is Lady Priora?"

There are 11 words in the title. I understood 7 of them. A what fell off in where in the what?

A dude trying his best to impress a lady, who snuffed her nose at him 'cause of the Lada. She then agreed to a vager that if he could jump it to the peer she'd go on a date with him. Poor Roman...

She thought she could make it.

Who the fuck is Lada Priora?

Priora
Seems like an appropriate name to be first off the ferry.

"According to eyewitnesses, quoted by "the Russian newspaper" before a dangerous maneuver, he shouted: "I should be the first in the Crimea!""